More Resistance Than Expected
Some Ph.D. Program Directors Refuse to See the Responsible Research Initiative as an Opportunity
Katrin Muff 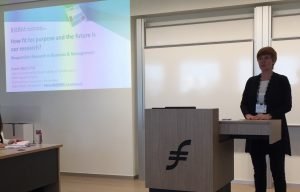 I had the opportunity to present the initiative as a keynote speaker at the EFMD Doctoral Programme Conference recently and was surprised by the degree of intellectual resistance to the idea. I had chosen a purposefully interactive presentation format, inviting the audience of Ph.D. Directors to reflect on their role in crafting programs that generate future researchers equipped to enable better business in service of a better world. What happened was not entirely what I had anticipated.

In a follow-on session that invited the same participants to reflect on how to embrace the Sustainable Development Goals (#SDGs) into their programs, some of the critical perspectives surfaced more clearly. One participant states plainly that inequality is a natural result of human nature and that it was entirely pointless to try and do something to mitigate it. He also stated that it was absurd to believe that poverty could be eradicated. A surprisingly long discussion followed about how poorly the SDGs were formulated and suggesting either reformulation, an obvious sign of how unfamiliar the participant must have been about the political process of how these goals were developed and the inherent limitations of the outcome. When I counter-argued that it would be impossible to reformulate them given that more than 190 countries had already adopted them, he said: well then, we may as well forget about them. Discharged as too idealistic!

I was expecting questions about how responsible it was to develop Ph.D. graduates that may not fit into the current reality of faculty promotion, having educated them to be able to work with different methodologies and stakeholders and achieve dissemination beyond a top journal publication. I was surprised to experience the degree of resistance to an initiative that was developed in « the trenches of academia » and yet was considered by those not part of the creation as a top-down imposition. « Academic freedom » is obviously a delicate thing that easily disrupts the most sensible conversations.

While the majority of the participants gained some inspiration and ideas for their programs and their role as academic change agents, an important minority claimed to have neither the power, authority, interest or need to reconsider their program objective in the face of the widely criticized limitations of current business and management research.  One voice questioned if the Responsible Research initiative claimed that all other research was irresponsible, ignoring the fact that a current A-journal publication costs about $400’000, takes about 4 years to complete and is read by an average of four people, none of which are the supposed beneficiaries of this research, namely business practitioners.

What do I conclude from this experience? I met some academics who preferred to defend the status quo rather than embracing their role to bring about a positive change. Such people can be found in all places of academia: among Ph.D. students, among junior and senior faculty, and among Deans and directors. What was different with the unconvinced in this crowd of Program Directors was the extent and degree of rejection to the normative claim that business research should serve a broader societal purpose. Even the normative word « should » was considered an imposition. While I admired the open debate and the freedom of thought to reject any normative idea, I am left wondering what this means to the assurance of relevance of research. These same people have no problem with other normative ideas such as great research consisting of an article that is published in a top-ranked journal. I would say great research is research that is read, understood and applied by business practitioners in their efforts of shaping change in service of a better world. In this session, I had to acknowledge that there is no agreement on such a statement and the mere fact of proposing a different norm was sufficiently challenging to the system that it was—at least by some participants—rejected. I could have avoided this lesson if I had simply presented the ideas of the initiative in an engaging lecture. I wouldn’t have heard the reactions of what was going on in some of the heads of the participants. Frankly, I much rather know and have such feedback, and I am most grateful for the respectful and highly energized debate we had. Acknowledging that plurality is an important underpinning of responsible research, and I classify the keynote as a moment of « action research » that has broadened the perspective of everyone in the room, leaving lessons learned to everybody present.

Changing an entrenched and intertwined system that produces what we label as « irresponsible » research is a journey that requires many levers of change to be in place so that one day things can change. As Bill Gates said, « very little changes in a year or two while we totally underestimate what changes in the course of ten years. » I am committed to the long-term, and I feel even better equipped to contribute to this change after this enriching experience!