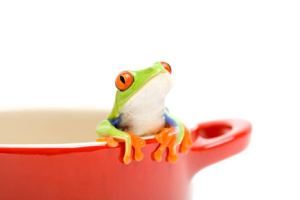 “And outside, the silent wilderness surrounding this cleared speck on the earth struck me as something great and invincible, like evil or truth, waiting patiently for the passing away of this fantastic [human] invasion.”

Hope & cooperation or fear & despair: how does humanity respond to slow onset disasters? The Covid-19 pandemic now just in its early global stage makes this question ever more important. Why are there delays in responding to this deadly virus? Why is the US President already backtracking on barely started responses? He seems to be obsessed with the pandemic’s politics and its associated stock market crash; already arguing that despite the immense forthcoming loss of life, “the cure can’t be worse than the problem.” Research that I have jointly conducted with Viviane Clement and Peter Tashman on adaptation to climate change’s gradual effects can help to develop a better understanding of the reasons for the dismal piecemeal response to the coronavirus pandemic.[*]

Our research indicates that this is not a problem unique to the current U.S. President. Top politicians and executives’ responses to slow onset natural disasters tend to follow typical patterns where the impending acute effect of the disasters are initially unsuspected or worse, ignored. For example, during its early stages the COVID-19 pandemic generated apathy and was then characterized as a “hoax” generated by alarmists pursuing a hidden agenda. As the severity of a disaster’s effects becomes harder to ignore, the adoption of avoided easy responses begins to increase. Unfortunately, if the slow onset disasters’ consequences are very severe and societies lack a technological breakthrough solution, then adverse biophysical limits take over and overwhelm societies’ ability to respond forcing retreat and in the most extreme cases collapse. In other words, societies tend to exhibit lower response levels at both the lower and upper range severity of slow onset disasters while displaying greater response levels during the medium severity stages of slow onset natural disasters. This typical pattern can be represented by an inverted U-shaped relationship between disaster severity and the level of responses implemented by societies.

We propose that this pattern of response to slow onset natural disasters arises for the following reasons. First, facing an emerging disaster, most top decision makers are oblivious to slow onset disasters cues and those that are aware find it very difficult to overcome the typical social/political/economic forces that favor the status quo. Even if detected, however, these slow-onset disaster cues are seen as not posing a strong enough threat to gain enough attention and catalyze proactive responses. Additionally, the complexity and ambiguity generated by emerging slow onset disasters make it difficult to identify their causes and future trends. Besides the lack of perceived vulnerability, the lack of societal response to emerging slow onset disasters also arises from decision making biases, such as a myopic focus on short term outcomes and illusion of control that spur country leaders to unwarrantedly perceive lower levels of disaster adversity as unimportant for their core country priorities.

At the other extreme, when very severe disaster adversity conditions are being experienced, top decision makers display a heightened vulnerability that enhances their support for adopting aggressive responses and bolsters their urgency to act. Also, this higher perceived vulnerability weakens political opposition to implementing aggressive responses. Yet, despite this increased sense of vulnerability, we argue that societies tend to begin abandoning their willingness to respond when facing extreme disaster adversity. This is because governments and other organizations tend to rely on traditional response practices similar to those implemented at the disasters’ medium severity levels. The effectiveness of these traditional practices becomes significantly undermined as very high disaster severity progressively imposes extremer biophysical constraints.  Instead, more in-depth, longer-term oriented, and innovative response efforts, beyond routine responses, are needed to develop advanced resilience technologies and capabilities that allow countries to effectively counter more extreme constraints from very severe disaster adversity. The challenge is that developing such advanced resilience capabilities and technologies involves risky change processes and breakthrough innovations that are very difficult to quickly develop and implement.

During the medium severity stages of slow onset natural disasters, the highest response levels are observed because biophysical constraints are not so stiff as to render response efforts too costly or ineffective. Concurrently, a country’s top decision makers begin to fully accept their societies’ acute vulnerability because it becomes difficult to miss, ignore, deny, or misinterpret the increasing threats posed by a fully unfolding slow onset disaster.  This higher sense of vulnerability increases the assessment of the net economic benefits of enhanced disaster response measures. It also leads to the decline of forces initially opposing adequate responses. The increased response levels during the medium severity stages a natural disaster may also arise from opportunities to imitate and/or collaborate with other countries that have already adopted successful and innovative disaster response approaches.

Jorge E. Rivera is a Professor of Strategic Management and Public Policy and Tucker Fellow at The George Washington University’s School of Business.  He is the founding Co-Editor of the Cambridge University Press’s Book series on Organizations and the Natural Environment. See his website at: https://sites.google.com/site/jorgeriveragwu/home