As we struggle with how best to combat COVID-19 in many parts of the world, stark differences have emerged in both the strategies and relative success rates of individual countries in stopping the spread of the novel coronavirus. Remarkably, China and South Korea have successfully arrested the expansion of the virus, while others, including the United States, appear to struggle with a coordinated approach to contain community transmission. What explains these differences?

One fundamental difference among these countries is distinct national cultures that shape collective behavior across a variety of social and economic circumstances.  In short, as the Figure below illustrates, East Asian countries have higher power distance, are more collectivist, and exhibit longer-term orientation than Western ones, especially those with an Anglo-American tradition like the United States and the United Kingdom.  These differences have implications for how we respond to unforeseen threats like pandemics.

Power Distance: In countries with high power distance, individuals accept that some people in society have greater power and authority than others, and they willingly follow directions and orders of those who are more powerful. With regard to COVID-19, in China, South Korea, Taiwan, Japan, Singapore and other Asian countries, citizens readily followed orders or faced consequences, sometimes severe. In the U.S. and U.K., not so much.

Collectivism: Individualism-collectivism refers to the degree of interdependence a society maintains among its members.  In individualist societies like many Western cultures, people tend to look after themselves and their direct family.  In contrast, in collectivist societies people take care of the broader group in exchange for loyalty and reciprocity.  In Asian countries’ response to COVID-19, there is an intrinsic expectation that individuals will put collective interests first. For example, in many Asian countries, wearing masks was from the start considered a civic duty and failure to do so viewed as a violation of a collective norm.

The Federalist Challenge: We also value the concept of “federalism” which essentially assumes that power and authority should be vested in the level of government closest to the citizenry.  In Europe, this same concept is known as “subsidiarity.”  In the case of COVID-19, this has manifested in widely varying responses across states and localities (and nations in the case of Europe) and a poorly coordinated patchwork of actions, potentially thwarting effective responses.

Most Western societies – including the United States – would not choose to sacrifice the personal freedoms that are part of our cultural fabric, including our pride in individual liberty, and certainly would never agree to the authoritarian manner in which these outcomes are achieved in countries like China.  But we can and perhaps should still ask the question of how to incentivize Americans and others from Western societies to make some of these same sacrifices in the service of containing the spread, duration, and impact of COVID-19.

Insights from Richard H. Thaler and Cass R. Sunstein, authors of the best-seller “Nudge,” might be instructive.  Specifically, their notion of “libertarian paternalism” in the form of purposeful “nudges” to stimulate the desired behavior could be effective.  Thaler and Sunstein describe two kinds of “nudges” that may have particular relevance to the COVID-19 context: robust feedback mechanisms that allow easy comparison of options; and social influence that stimulates individuals to change behavior based on knowledge of how they stack up in comparison to peers.

How might an understanding of Americans’ tendency toward individualism, short-term orientation and lower power distance as manifested in resistance of governmental authority, combined with the behavioral incentives of “Nudge,” help stimulate some of the same successful COVID-19 responses observed in China and South Korea?

As a start, Americans respond less well to “negative” incentives that may be perceived as an overreach and better to positive incentives that reward the desired behavior.  Given this, pharmaceutical companies that invest in and successfully trial COVID-19 vaccines can be provided vouchers for expedited FDA review of other drugs, a process that is already in place for companies that develop drugs for rare and neglected tropical diseases. Appealing to the innovative, competitive spirit that is indicative of individualistic countries, governments and companies could hold national competitions (with a sizeable monetary award) for development of tracking and tracing apps such as those used in South Korea and provide incentives for individuals to use the app so that tracing can be more effective, providing a robust feedback mechanism, without necessarily compelling participation.

To respond to the different disease burden and uneven public health infrastructure across states and localities, medical professionals who are willing to relocate and be redeployed to higher-need regions could receive cash payments and have their student loans forgiven or deferred. As a way to appeal to collective behavior without dictating it, governments could publicize comparisons of neighborhoods and communities and highlight those communities that have been especially effective in stemming transmission, creating social influence pressures that could result in increasing adherence to policy guidance; As individual communities achieve higher levels of success, they can be “rewarded” with gradual easing of restrictions and loosening of prohibitions.

These are just a few of many ideas that could be implemented that might help instill some of the same behaviors by Americans and others in the West that Eastern countries exhibit, without sacrificing the personal freedoms, choices, and rights that we have come to treasure. Some of this is already happening, but with an understanding of cultural differences and incentives, and the potential to affirmatively “nudge” behavior, we might be able to achieve more progress with less disruption. 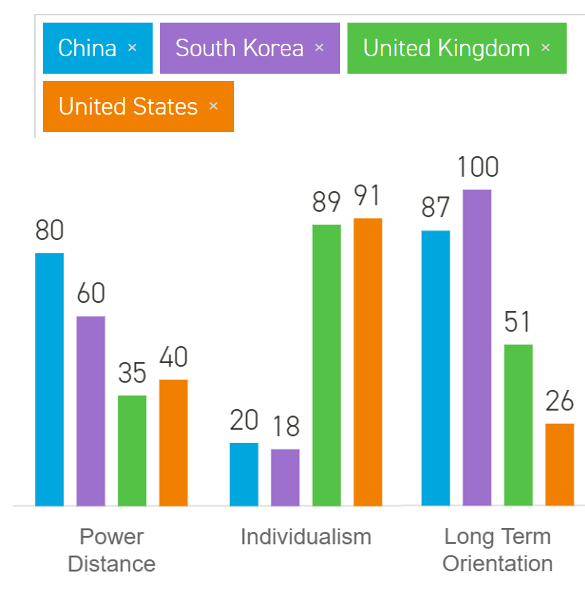 Jonathan Doh is Associate Dean of Research and Global Engagement, Rammrath Professor of International Business, and Co-Faculty Director of the Moran Center for Global Leadership at the Villanova University School of Business.