Amidst the current Corona-crisis one chart gained massive popularity in social media. It is called “flatten the curve”, and relates the number of infections to the capacity of public healthcare systems to treat COVID-19 patients in a given period of time. Raising awareness about this simple but scientifically-grounded curve was critical for people to understand why immediate action was needed to slow down the spread of the virus in order to ensure adequate treatment of everyone infected, and to keep hospitalizations below the threshold line – ultimately to avoid the collapse of public healthcare systems.

There is another curve we should not forget, and it has a striking similarity: It links global temperature rise and associated climate risks with the Earth´s capacity to sustain anthropogenic greenhouse gas emissions over time. What the Earth can handle is often referred to as our planetary boundaries that provide the safe operating space of industrial production and consumption. Flattening this curve would mean to limit our pollution and emission levels to the Earth’s carrying capacity, and not crossing the threshold line as well. 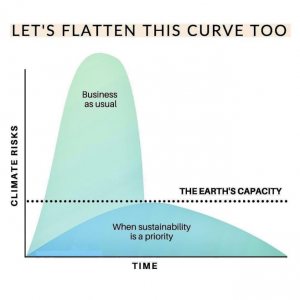 Looking at the consequences of crossing the “Corona-line” strikingly illustrates what we should expect when crossing the climate-line with business as usual: The collapse of ecosystems (including fresh water supply, fertile soils, and oxygen production) that allow life on Earth as we know it – resulting not only in ecological consequences such as global warming, but also social consequences such as mass migration and malnutrition. While the economic and social costs of the Corona crisis already materialize, research shows that the expected long-term costs of the climate crisis will most likely exceed that of the Corona crisis manifold – only that those accrue over a longer period of time.

The reactions of societies to the virus around the globe however give hope. It is possible to also stay below the “climate line” when we make sustainability a priority for all? Businesses have a key role to play in this regard. We currently see old and new forms of irresponsible and unethical behaviour of firms exploiting people`s suffering and misusing new laws aimed to help the weakest rather than global businesses with record revenues. However, we are also currently witnessing impressive corporate social responsibility efforts of firms that sincerely aim to help slow down the spread of the virus for instance by voluntarily switching production to healthcare materials. In fact, only recently have managers from global multinationals like IKEA, Covestro, H&M, Danone, Microsoft and others, together with politicians from the EU and its members states issued a call to rebuild the economy by keeping sustainability and climate goals and the European Green New Deal in mind as a framework for action. While the sincerity of such public statements by businesses remains to be tested, it is a notable step in the right direction of how businesses and governments together can get out of the crisis by strengthening sustainability, not by weakening it.

After all, what the Corona-crisis shows time and again is that market forces alone will not solve the problem, let alone creating outcomes deemed as fair and just for all. What we now need is strong rather than weak governments and smart business regulation for sustainability that fosters innovation and creativity while resting on democratic mandates and continuous legitimation through the broader public.

If we can do this for Corona, we can also do this for the climate! #flattentheclimatecurve #rebuildgreenbusiness