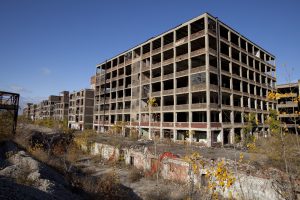 By Albert Duce, from Wikimedia Commons

My answer is that we are at a turning point in the organization of capitalism, and the direction we take is not inevitable. Whether we bring about a more humane and democratic future, or a generation-long episode of Black Mirror, depends on choices the coming generation of business leaders, policymakers, and the public make. And responsible research can serve as a guide.

The need for responsible research in business is tied to the history of the corporation and the business school. The early 20th century was a tumultuous time for the organization of capitalism. The technology was changing rapidly. Railroad and telephone networks had shrunk distances and made possible the transportation of goods across continents. New methods of power generation meant that factories and homes were being wired for electricity, expanding the workday and creating markets for new kinds of products. Economies of scale through mass production meant that new kinds of organizations were the cheapest way to produce goods.

Global trade reached unprecedented levels on the verge of the First World War. Supply chains spread around the world, abetted by colonial empires.

The subsequent history of management research reflects a kind of pendulum that swung between an emphasis on efficiency (e.g., scientific management, TQM, lean) and an emphasis on the human side of enterprise (human relations, culture, positive psychology).

Research also followed this division of labor, with the large, publicly-traded American corporation serving as the de facto standard for the kind of thing that business research “should” study. (Research on business in exotic lands outside the U.S.—e.g., Canada—were relegated to “international business” departments.) Theories that applied exclusively in the U.S., such as agency theory, came to dominate entire fields.

Since the turn of the 21st century, however, business has undergone another epochal shift in its organization. The collapse of the Soviet Union and the breakup of Yugoslavia, along with the opening of China’s economy, meant that public corporations spread more widely in the 1990s. However, according to the World Bank’s World Development Indicators, a small number of mostly English-speaking countries still account for the bulk of the world’s public corporations (in particular, the U.S., the U.K., Canada, Australia, India, China, Japan, and Spain), and public corporations have been on the decline in the U.S. for two decades. Public corporations are no longer the default way of doing business even in the U.S.

At the same time, we have seen a flourishing of alternative forms of economic organizations around the world, from mutuals to co-ops to pop-ups to peer mutualism (e.g., Linux, Wikipedia). In just 5 years, platform cooperativism has become a vibrant social movement with global outposts and an evolving infrastructure. It is clear that the kinds of corporations that business schools were invented to serve are not the inevitable future, even in the land of their birth.

In this context, we need new kinds of research, guided by a commitment to making a better world, to guide business practice. Just as medical practice is better when guided by research rather than just the gut instincts of health care providers (or the marketing efforts of pharmaceutical companies), business practice is better when guided by research-based understandings of public benefit.

Wilbur K. Pierpont Collegiate Professor of Management at the Ross School of Business and Professor of Sociology, Associate Dean of Impact, The University of Michigan; Past editor of Administrative Science Quarterly and Director of the Interdisciplinary Committee on Organization Studies (ICOS) at Michigan.