What is a Good Theory? Key to Responsible Research
Anne Tsui & Sandra Waddock

Recently we were at a Humanistic Management conference where questions came up about why a truly important academic paper on an extremely important topic (in our view, anyway) had not gotten much uptake with scholars since its publication in 2015 and wide discussion at the 2016 AOM meeting. Further, it has received very little or any attention in the popular press, despite clear implications for a rethinking of the role of business, something that seems necessary in light of issues like climate change that call for different business models. The paper proposes a “theory of business” (by Thomas Donaldson and James P. Walsh) that dramatically departs from the current shareholder value maximization model. It shifts the focus from the model of the firm to the model of how business fulfills human values. Given the mounting criticism of the negative externalities of the shareholder value maximization model (such as corporate greed, corruption, environmental degradation, income inequality), we were surprised that this bold treatise on business hasnot received as much scholarly or public attention as we thought it should.

We began to wonder what defines an important conceptual paper that aims to introduce theory, descriptively, normatively, or both? The new “theory of business” is grounded on assumptions of human nature and value creation that differ significantly from traditional economic thinking.  Neoclassical economics narrowly (and some legal experts claim erroneously) defines the purpose companies as wealth creation for shareholders and people as self-interested maximizers. The “theory of business” goes beyond these narrow definitions and proposes that business should optimize value for all stakeholders of the firm creating what the authors call “optimal collective value.” The authors claim that business activities must respect, protect, if not honor, the dignity of the human person. Shareholders, from this perspective, are no more or less important than other stakeholders whose contributions and wellbeing are just as, and in some cases could be more, important than that of shareholders.

The Responsible Research in Business & Management initiative argues that research needs to be both useful and credible, ultimately aimed at creating a better world. This “a new theory of business” paper appears to meet the standard of usefulness according to the responsible research idea. What about the credibility dimension of responsible research for a theory paper? Until we have gathered enough empirical evidence on the theory, how do we know that the predictions are valid? These questions seem reasonable under the positivist science tradition. In the history of management research, however, we can recall many theories, especially in the recent two to three decades, which have led to widespread practice without solid empirical evidence. Even when there are empirical tests, due to confirmation bias in the review process, the published studies only offer confirming evidence. Due to reactivity and self-fulfilling prophecy, behaviors, and practices, even unhelpful ones, can begin to become consistent with the theoretical predictions. This means that persuasive theories, even without scientific evidence (both confirming and disconfirming), have a powerful way of shaping or changing reality.

RRBM introduces seven principles to guide research to produce both credible and useful knowledge. The three credibility principles are directed mostly at empirical studies. The RRBM position paper is largely silent about conceptual or theoretical work. How do we know if the ideas in a conceptual or theory paper are credible? How do we evaluate the usefulness of theoretical ideas?

Years ago, Kurt Lewin observed that “Nothing is so practical as a good theory.” The “good” here refers to a theory that explains accurately and predicts reliably. This means that the “good” standing of a theory cannot be attained until it has been tested repeatedly and the empirical evidence has been observed for reliability. But, how do we know that a new theory is going to be important before it has been tested? How would a new theory catch the attention of other scholars who found it worthwhile to spend their valuable time to test this new theory? 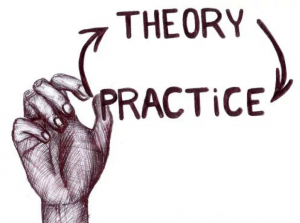 Our discussion during the Humanistic Management conference focused on a question that is at the heart of doing responsible research: What does a good theory that has the potential to change the world of practice actually look like? What principles guide the development of theories that would exemplify responsible research: the production of both credible and useful knowledge (useful in improving and not degrading humanity, present, and future)?

When we considered what makes good ideas and theories appealing, we quickly came to a consensus that good theories are simple, clear, and accessible. Good theories, ideas, and insights break complicated issues and problems down to their essence. Occam’s Razor or the ‘law of parsimony’ declares that good theory provides the simplest viable or realistic explanation for the insight, observation, or phenomenon. That means that the more complicated the theory, the more assumptions are being made and the less likely the theory can actuallyexplain the phenomenon at hand. Good theories do not have multiple (trivial or obvious) propositions, impenetrable jargon, and “gap seeking” based on the literature rather than observation of actual phenomena.

Developing good theories is part of responsible research—theories that address real issues or are motivated by a desire to explain a puzzle in the real world, offer explanations and predictions that can be tested and will potentially hold up in repeated testing. This means that good theories should contain predictions that are general and transcend boundaries. Theories that focus on main effects without too many contingencies are likely to hold up across contexts and likely to be more broadly useful than theories that provide precise predictions under very special circumstances.

We also know that some theories in the social sciences are, as the theory of business is, fundamentally normative. When the theory is about a (current or future) social reality and given that social theories can change social reality, the social consequences of the new reality must be considered in assessing the potential usefulness of the theory. What if the reality that the theory aims to change (e.g., greed among managers) become strengthened rather than weakened? In other words, scientists have a moral responsibility to assess the risk of drawing wrongful conclusions from their proposed theoretical predictions, as they would do with assessing the risks of type I and type II errors in empirical findings. Good theories then make sound ethical sense. Failure to recognize the real-world and ethical implications of the theory has wide repercussions. Witness today’s dominant economic theories about human nature and the functioning of firms, which have resulted in what many observers believe to be an unsustainable future.

After much musing, we became convinced that we need new criteria to evaluate a good theory beyond explanatory or predictive accuracy. We invite the RRBM community to join us in proposing new principles to guide responsible theory development that will meet the criteria of usefulness, credibility, and ethical implications. Here are a few thoughts to start this exploration.